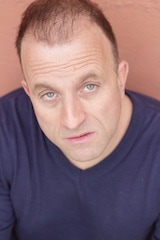 I have over twenty years of experience in the entertainment business. I bring an eclectic wealth of value to any project I work on. I have worked as an actor, director, writer and producer, which enables me to have an understanding regarding all facets of the business.

Originally from Queens, NY, I've drawn from real life experiences and characters that make up the framework for my writing and acting.

I've written and produced such shorts films as “Big Man on Mulberry Street” which premiered at the Vortex Theatre in New York.  “Toothpicks” a British comedy which has played in various film festivals.

Among my many projects, I've developed and written a scripted TV pilot called “Late Bloomers” that is currently being pitched in Hollywood and Harry Werksman who has produced and wrote for such TV hits such as "Castle", "Grey's Anatomy" and "Ugly Betty" is interested in writing for the show once it gets picked up.

Other projects in development are "Sexton Heights" (Horror/Comedy) feature to a New York comedy called “Pumping Up” which will be produced by Tony Timpone of "Fangoria" fame.

And finally, I've edited and produced a web series called "All About Manos" written by my wife Catherine Natale  and Eden Young currently in post production. Look for it soon.